This [the Maria-sama ga Miteru figure collection, camera manuals and Russian novels supplied separately] arrived yesterday. Now, to distract you all from my unhealthy obsession with Japanese lesbian schoolgirls, let's look at something not entirely unrelated to my own field of research, which I'm avoiding doing any of at the moment.

The set consists of 6 figures, sold randomly in sealed boxes. They're supposed to be sold individually, but for practical purposes, they tend to be exported to people like me - that is, anyone shopping online - in boxes of 8 (the same ones that are sold to retailers). Now, we're interested in how many figures we need to buy to complete the set. According to mathematical convention, "we" means me and anyone reading, but in this case, it can roughly be interpreted as "grubby little perverts". Did I mention that you can look up their skirts?

We start with nothing, of course. Being otaku, we'll end with nothing as well, but that's beside the point. E(X_0) is therefore 1. The probability that the second figure is one we don't have is 5/6, and we are going to keep buying until we get one or we run out of money (the latter is technically known as a stopping time. How close we are to completing the set when we become bankrupt is another related question that I'm not going to address here). So that's a series of independent trials, and we stop after the first success - in other words, X_1 is geometrically distributed. Hence, E(X_1) = 6/5. Continuing in this way, we get

Now, while that seems a bit cruel to the last 0.7 figure (with any luck it'll be Yumi, because she comes with a second upper body, and 70% of the kit still makes up a complete figure. Unfortunately Touko isn't in the set, because most fans would be quite happy to see her ritually decapitated), that means that most people are going to have to buy two display boxes to complete the set. Not bad, because it means Movic sell at least twice as many figures as they would if it was just a box of 6 - assuming no actual trading goes on. That's quite probable, since it involves admitting to your schoolgirl fetish. In fact, if we generalise to n items, we get

which looks an awful lot like a discrete form of a well-known integral. Hence the relatively well-known result

which gets used in lots of papers, but nobody ever really bothers to prove.

Next week (not bloody likely) we look at the Mitsumete Knight trading card deck, and consider:

1. How it differs from most other such sets

2. How to get those last two skirts in Mitsumete Knight R, which isn't really related to coupon collecting but has been pissing me off for weeks

3. The expected number of cute girls required to make someone who normally considers trading cards incredibly sad actually buy the damn things (hint: it's about 16, which oddly enough is well over their average age, at least at the start of the game. Although Noel is possibly immortal, which might push the average up a bit. Don't even get me started on Sister Princess). 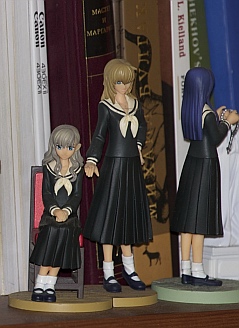